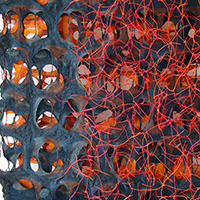 Jiyoung Chung is a Joomchi artist, freelance writer, and independent curator. She has developed an innovative method for utilizing a traditional Korean method of papermaking called Joomchi. In Jiyoung’s hands, the ancient takes on a more contemporary appearance. The Hanji (Korean mulberry paper) reveals itself as a painterly, abstract and contemporary art form filled with sculptural and textural imagery.

Jiyoung Chung received her BFA in painting from Rhode Island School of Design with honors and awards, and her MFA in print/media from Cranbrook Academy of Art. She has had numerous solo and group shows throughout Korea, China, Finland, Canada, U.S., Australia, France and the U.K. including at Martin Museum of Art, Baylor University, in London, England in conjunction with the Knitting & Stitching exhibition organized by ‘Twistedthread,’ at Minnesota Center for Book Arts Gallery, sponsored by the 2011 Surface Design Association Conference, and at the Museum of Craft & Folk Art, San Francisco.

Jiyoung has been introducing Joomchi (Korean traditional textured and painterly paper making) and other unconventional drawing/collage through guest lectureship at various academic situations including at Rhode Island School of Design, RISD CE, Split Rock at University of Minnesota, Penland School of Craft, the International Surface Design Conference, Geelong Textile Forum in Australia, Zijdelings in Tilburg, Netherlands, Spring Semester at the Hansung University in Seoul, Korea, Haystack Mountain School of Craft, Arrowmont School of Craft and many others. In 2010, she curated an International Joomchi show at the 2010 European Patchwork Meeting, Alsace, France. This show eventually toured to Korea and the US.