Summer Program for Children was a great success from June through mid-August. Teen Bridge and Artist in Residence have been going strong. We are preparing for return to School Partnerships and hope to gradually open in-person classes this fall. Stay tuned! Sign up for updates. 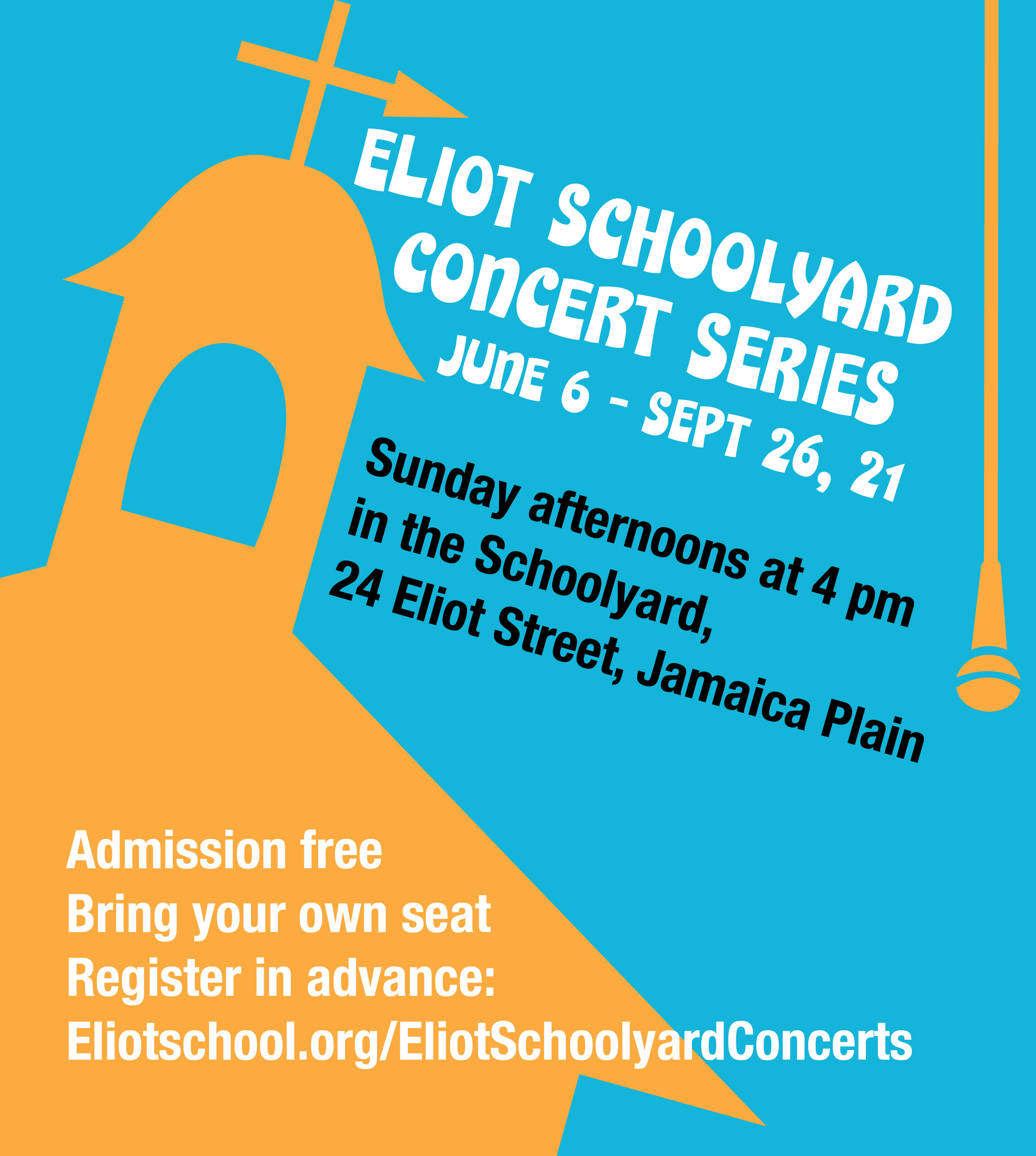 RSVP FOR A SUNDAY AFTERNOON HERE

Enjoy live music, outdoors in a creative, vibrant space that is safe and socially distanced. State and city public health guidelines will be enforced. Concertgoers need to bring their own seating, and groups will sit six feet apart. No dogs, please. The concerts are FREE; your suggested donation of $10 will help cover the costs. Registration Required.

The series is presented by the Eliot School of Fine & Applied Arts, which inspires lifelong learning in craft and creativity for all, both in Boston’s schools and community centers and at its Jamaica Plain schoolhouse. The concerts are a departure for the Eliot School, which ordinarily focuses on craft and visual arts. Executive Director Abigail Norman says, “Live music outdoors brings people together in ways that transcend the troubles of the moment. We are proud to make this joy available after a year of such intense isolation.”

June 13: Notebook P / Miranda Rae ('R&B Artist of the Year' 2020!)
Singer/songwriter Notebook P has been nominated for Boston Music Awards’ ‘R&B Artist of the Year,” an honor Miranda Rae won in 2020. Notebook P’s catalog includes the EP, “I Made This, For You”, with producer Humbeats, debuting with The Museum TV’s newest performance platform, “The Window Seat.” Miranda Rae debuted her “Excuse My Baggage” EP in 2019. “Thinkin Bout You” became the top single from the project, and dubbed a classic.

July 11: 40 Million Feet (Nepalese sarangi & acoustic guitar)
On a sunny day in October 2017, Shyam Nepali was walking along the Charles River and noticed Charlie Giargiari playing guitar on a bench by a waterfall. Shyam quickly ran home and got his Nepalese sarangi for an impromptu improvisational jam. And so began 40 Million Feet. 40 Million Feet is the approximate distance from Boston to Kathmandu, Nepal. NPR’s Tiny Desk Concerts said, “The blend between the unlikely pair of instruments is something magical, effortlessly capturing the essence of two different music worlds.”

August 1: DJ WhySham (Your Community DJ)
2x ‘DJ of The Year’ Boston Music Awards nominee, DJ WhySham is an activist, and an on-air personality for SparkFMOnline Radio. Her background in criminal justice and community outreach has led her to merge her artistry as a DJ with efforts for positive changes in Boston's disenfranchised communities. She believes in bringing music, hardship, and pain together while creating a release for collective trauma.

JP PORCHFEST CLOSING EVENT
C A N C E L E D   D U E   T O   W E A T H E R
August 22: Alec Hutson / Naomi Westwater (soul/funk/folk/indie/pop vocals and more)Two songwriters take the stage. Alec Hutson's songs have been called “warm” and “richly devastating.” Naomi Westwater’s have are “striking, eclectic, beautiful, and unlike what you may have heard before” – “packed to capacity with emotion, power, and soul.” This is the closing event for a weekend of music, JP Porchfest, produced by Dunamis Boston. Check their schedule for music all weekend at the Eliot Schoolyard and elsewhere.

September 19: Dzidzor / Prateek (Ghanaian & American folk & blues)
Performance poet Dzidzor says, “I think of myself as a storyteller whose responsibility is to alarm the power/abundance we have in the midst of our own bodies.” Her poetry is a form of music rife with rhythm and emotion. Prateek’s “elegant songcraft and luminous voice capture the ear and heart.” (Boston Globe) 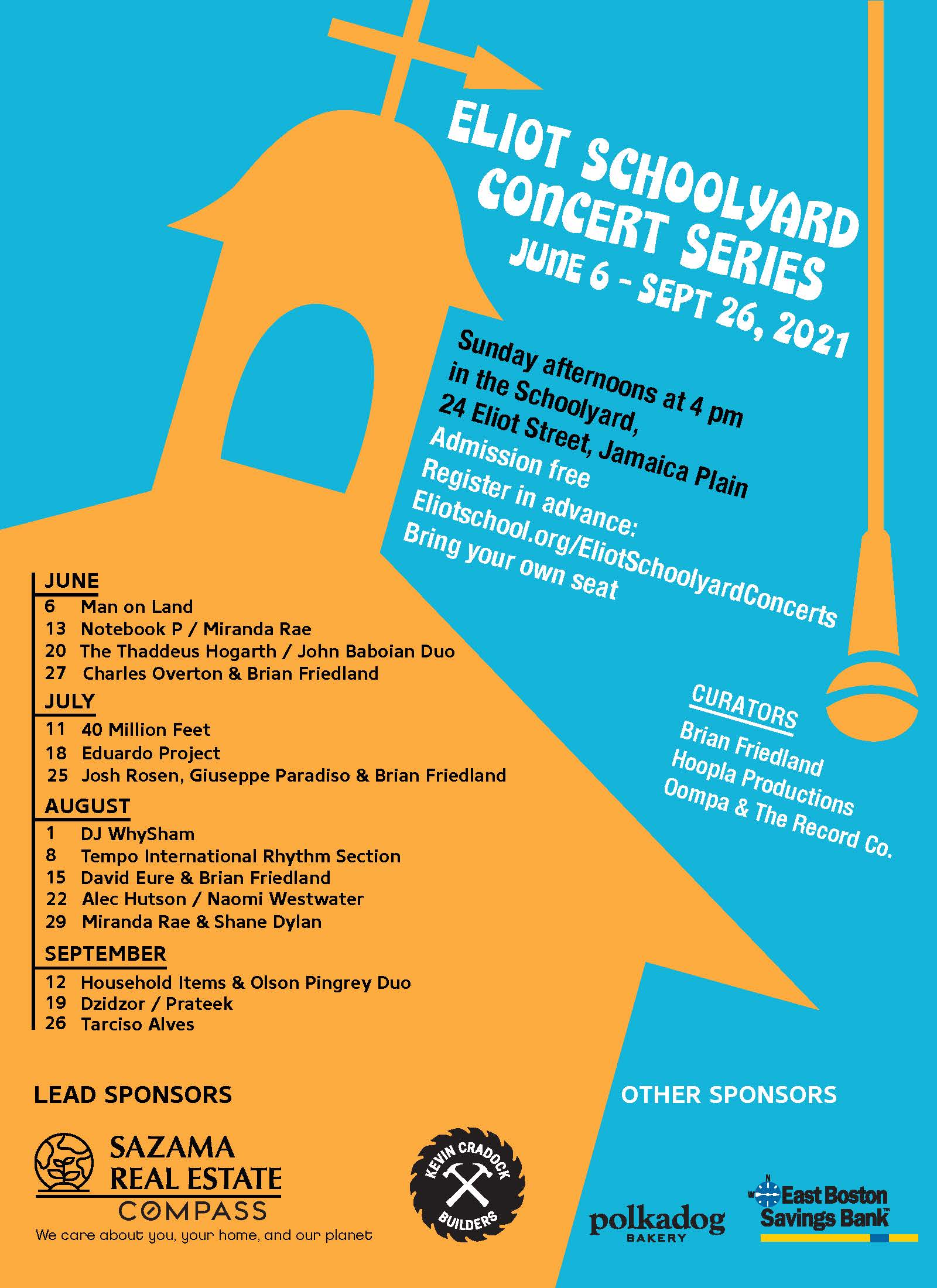